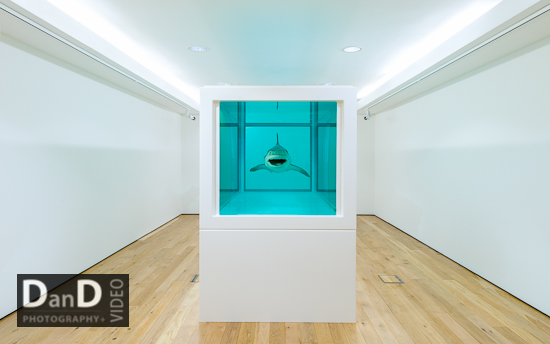 I recently had the pleasure of photographing part of the Great Exhibition of the North up in Newcastle for an architectural client who designed the Which Way North interior ‘takeover’ of the Hancock Museum.

Amongst some prominent exhibits on loan was Damian Hirst’s ‘Heaven 2008-2009’, one of his infamous floating shark in formaldehyde pieces. It’s an impressive thing to see in the flesh, and from a technical point of view a nightmare to capture photographically (at least head on – being primarily an architectural photographer I wanted to get some symmetry going on).

The difficulty was mostly due to a myriad of reflections/ refraction that glass + water  produce, so excluding myself, my equipment and everything going on behind me from showing in the photos was pretty much impossible. However, with a spot of delayed shutter release, side stepping out the way, and a judicious amount of post production I managed to grab a few frames and produce a final image I was pleased with.

> See this photo larger, and more from the exhibition here

> See other art, exhibition and gallery portfolios on my new architectural website here

Posted on 07.10.18 to Exhibition photography, interior photography by Dan